Asake Apologises To Fans For Brixton Show Cancellation And Stampede

YBNL superstar, Asake has apologised to fans present at his 02 Brixton Academy following a massive stampede.

Happening in the early hours of the 16th of December, which is the third day of the singer’s performance at the approximately 5,000-capacity venue, the stampede took place outside the venue by stranded show-goers who attempted to force their way into the venue.

“My heart is with all those who were injured last night and cause any form of discomfort. I pray you get well soonest.

I am also in the process of reaching out to individuals. I still do not have the full brief from the venue management themselves as to what led to the disruption at the entrance of the Brixton Academy, but we are thankful that all was peaceful at the end.

For my people who enjoyed the beginning of my performance, I am sorry that it was cut short. Thank you for your unbelievable love London. I love you too much! I’m looking forward to seeing you again in a bit!” 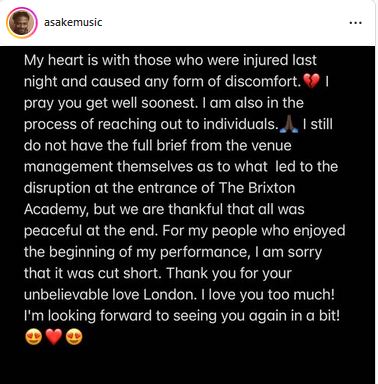 Currently, while the show promoters; Cokobar have also expressed their sorrow over the event turnut, no explanation has been tendered over the cause of the stampede. However, four show-goers have been reported to be in critical condition and are receiving hospital care