Chris Brown and Rema are two of the biggest names in the music industry, and it looks like they have a mutual respect for each other.

Recently, Chris took to Instagram to acknowledge Rema and express his appreciation for the young artist’s humility. Rema responded by thanking Chris for the acknowledgement and for his support of Afrobeats. 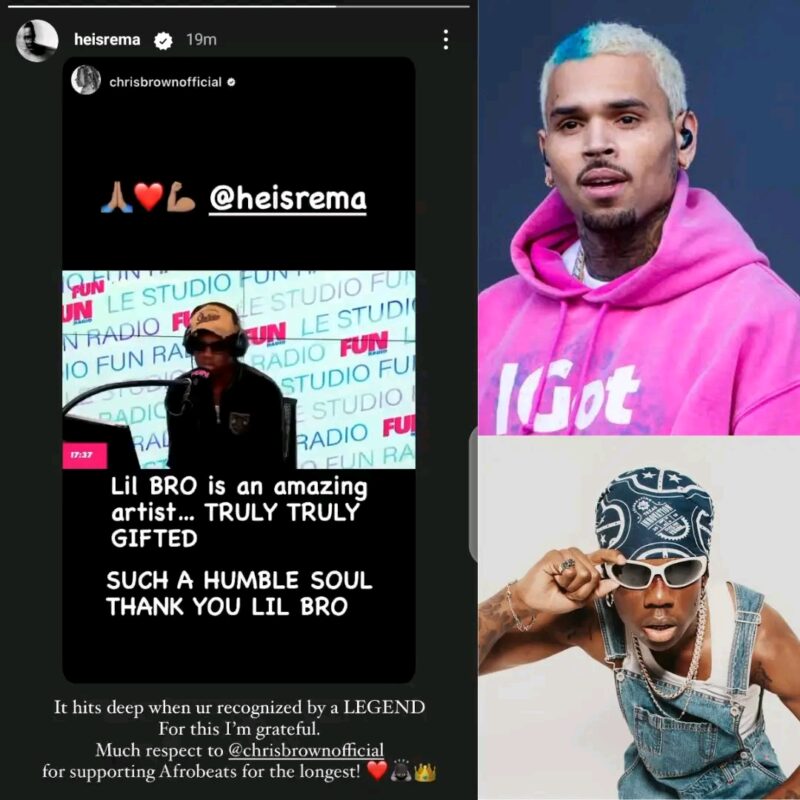 The exchange between the two artists is a testament to the power of social media and the ability for musicians to connect with each other and their fans from all over the world.

Chris Brown is known for his R&B and hip-hop hits, while Rema is a rising star in the Afrobeats scene. Despite their different musical styles, it’s clear that they both have a deep respect for each other’s artistry.

Chris’s acknowledgement of Rema is also a nod to the growing popularity of Afrobeats in the international music scene. The genre, which originated in Nigeria, has been gaining popularity in the US and other countries in recent years, thanks to the efforts of artists like Rema and others.

Chris’s support of the genre is a sign that it is continuing to gain mainstream acceptance and recognition.

This is a great example of how music can bring people together, despite their background, language and location

If you ask me, I would say that a collaboration between Chris Brown and Rema would be a great way to bring together different cultures and styles of music, and it would be interesting to see how they will bring their unique sounds together.

In conclusion, Chris Brown and Rema’s exchange on Instagram has raised speculations that they may be working on a track together. The idea of a collaboration between the two artists is an exciting one and would bring together different cultures and styles of music. Fans are eagerly waiting for an official confirmation of this news.