FFK: I would rather die than join APC or bow to Buhari

His blast from the past; the Transmogrification of a Buhari Tormentor 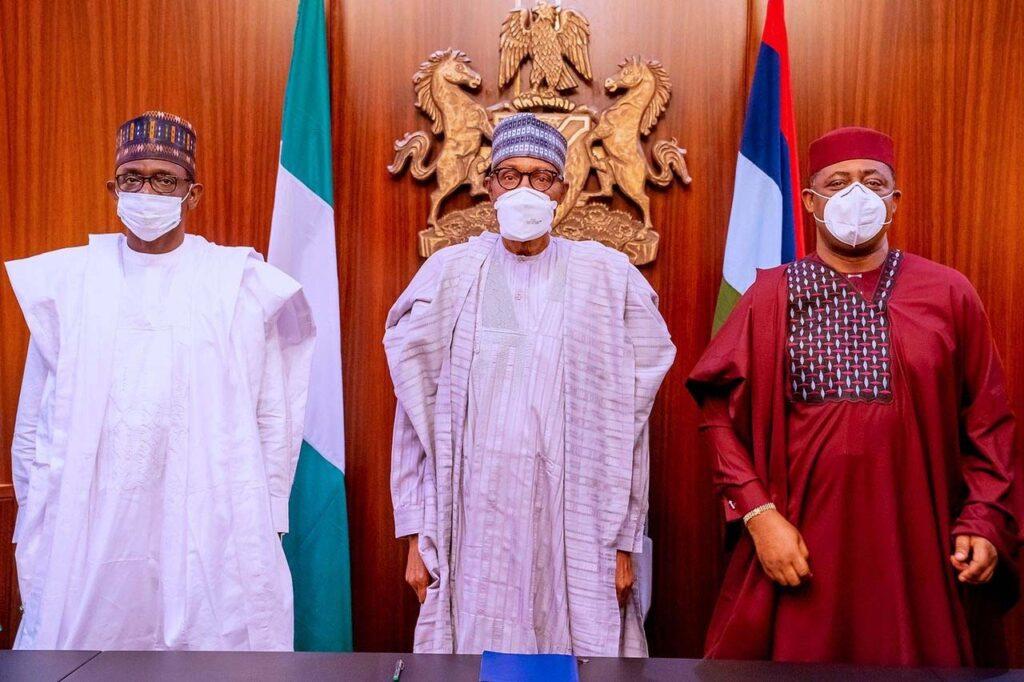 Call it Jero’s Metamorphosis or Yeh Trials of Brother Jero (apologies to Prof. Wole Soyinka), you wouldn’t be wrong. That is for literary minds.

But “religious” people would say Thursday’s transformation of Brother Femi Fani Kayode was reminiscent of the dramatic conversion of Saul to Paul on his way to Damascus – the only difference being that while Saul’s own was swift, that of Femi had long been expected.

In fact, Kogi state Governor, Alhaji Yahaya Bello had earlier in the year said Femi had ported to the APC.

We take a look at some of the utterances of the man famously called FFK before his recent realignment with the President Muhammadu Buhari-led administration.

On Channels TV in 2015 before the general elections, he had said;

“I don’t believe that the Nigerian people will ever vote for a man that believes we should drag this country back. A man with a pitiful record.

“When he was in power he locked people up, he crated people, he killed people with retroactive legislation, he carried people on the streets of London illegally, turned Nigeria into a pariah nation; a man that looted PTF and I say that because I was in government and I was close to President Obasanjo at the time. I know what the president told me and Akin Osuntokun. In fact the main person in that report, that is Surajo an in-law to Buhari dropped dead the day that we decided to prosecute Buhari, that man would have been a key prosecution witness and Buhari would have been in jail by now”.

In 2018 shortly after Senator Shehu Sani lost out on the APC and it was obvious he won’t be going back to the Senate, FFK said;

“It really is a pity that @ShehuSani will not be going back to the Senate. He was a strong voice and a great advocate of justice and peace. How I wish he had left APC long ago and joined PDP. I have always had immense respect for him and he remains a good friend. I wish him well”.

Reacting to the defection of Obanokoro and Omisore to APC in 2018 FFK said.

I do not blame them for joining the ruling party to avoid persecution. Some are strong whilst others are weak. I would rather die than join APC or bow to Buhari.

In that same 2018, Minister of Niger Delta Affairs, Chief Godswill Akpabio had visited President Buhari in London and he said;

“You remain the father of the nation, our father and political father to all. Just like I told Asiwaju Bola Ahmed Tinubu and Vice President Osinbanjo yesterday in Nigeria… Those who think that they have politically grown to insult you will all regret it before month end sir. I am here (London) to register my undiluted love and unalloyed support to you. I was involved in all their meetings and I know what their plans are. The long recess of NASS is going to be your advantage and not theirs like they thought and planned”.

FKK in a lengthy message, did not only abuse Akpabio, but he went further to take Buhari to the cleaners. That article is reproduced below.

The fact that the former Governor of Akwa Ibom, Senator Godswill Akpabio, is a coward and a traitor is no longer in dispute. The fact that his brazen treachery knows no bounds is what can best be described as “settled law”.

A leader must be ready to sacrifice his liberty and life in defence of truth, justice and righteousness and he must be prepared to defend his nation, faith, people and loved ones no matter the price he may have to pay.

Sadly such noble virtues and high standards are lost on men like Akpabio. To them such matters and sentiments are like Greek or Latin: they can neither understand their meaning or grasp their import.

They fail to appreciate the fact that fear is not a virtue but a vice. They refuse to acknowledge the fact that to blink the eye, bat the eyelid, surrender, compromise, buckle, capitulate and bend the knee to the tyrant and his minions in a futile and last minute attempt to preserve your life and liberty is utterly shameful.

Akpabio’s desire to decamp to the APC due to his trepidation and fear of the EFCC and Buhari’s regime is pitiful. If he has done nothing wrong then why the fear and why the trepidation? Where is his faith in God?

And if he has done something wrong, given the fact that he has opposed them virulently for the last three years, does he honestly believe that the Buhari regime will not punish him by using it against him if they manage to get back to power next year, no matter how much he helps them today?

If he believes that then he is not half as intelligent as I once thought. Buhari is not a man of honor, he is not a worthy ally, he does not keep to his pronlmises and he does not have friends. The only friend he has is his insatiable lust for power which he feeds on a daily basis.

Aside from that the following questions come to mind. Does Akpabio honestly see any good in Buhari and his goverrnment? Is that what he thinks that Nigerians deserve to suffer for the next few years and if so what is their crime?

Has he forgotten the gratuitous insults that Buhari dishes out so lavishly on the Nigerian people whenever he travels abroad and speaks to foreign leaders and the foreign press?

Has he forgotten about all those that the Buhari government have killed and all those that have died and suffered in the struggle against them? Does the shedding of innocent blood by a desperate government mean nothing to him?

Has he forgotten the tears of the tormented and persecuted and the cries of the widows, orphans and the bereaved whose loved ones have been butchered by jihadists, religious fanatics, cow-lovers and ethnic supremacists that Buhari has protected and encouraged over the last three years?

Has he forgotten the anguish of those whose loved ones have been locked up indefinately and those who have been demonised and subjected to the most barbaric and insidious media witchunts in the history of our nation?

Has he forgotten the practice of double standards in the application of our laws? Has he forgotten how the rogues in Buhari’s cabinet and government and the governors in his party are above the law and get away with blue murder?

Has he forgotten about the slaughter of northern Christians, IPOB youths and Shiite Muslims?

Has he forgotten about the censorship of the media and how newspapers houses and radio and television stations are warned against airing or publishing anti-government material?

Has he forgotten about Buhari’s insidious secret romance with Boko Haram and how he has strengthened them in the last two years by freeing their commanders and paying them huge and unprecedented ransoms?

Has he forgotten the appauling way that members of our Armed Forces are being treated by the government and how they are massacred on the front lines and given secret mass burials in secret graves with no honor or thanks?

Has he forgotten the vitriolic terms and words that they used to describe President Goodluck Jonathan, President Olusegun Obasanjo and every single PDP leader and government that held power between 1999 and 2015?

Has he forgotten that Buhari considers himself to be the third and final Mahdi of the north and that he has nothing but contempt and disdain for those that come from the Middle Belt and the south and those that do not share his religious faith?

Has he forgotten the insults the Buhari government heaped on southerners, Middle Belters, Afenifere, Ohaeneze, the Niger Delta Elders, the Middle Belt Forum and every single elderstatesman and leader that has called for the restructuring of our country.

Has he forgotten about the division, strife, disgrace, penury, corruption, poverty and despair that they have subjected the Nigerian people to over the last three years.

Has Akpabio forgotten about all these things or is that he is so tormented by the fear of his own shadow, the EFCC and Buhari’s ghost that he has capitulated like a fatherless peasant that lacks nobility, class, dignity, self-respect, good-breeding and honor?

On a general note one is constrained to ask: why are most Nigerian leaders plagued with such a cowardly disposition and servile spirit? Why do they compromise so often and why do they tremble before power?

If Akpabio had issues with PDP that is fair enough. We all have issues with the party in varying degrees.

Yet if he felt constrained to leave why can’t he join any of the other numerous opposition parties? Why does he have to sell his soul to the devil and enter a Faustian pact with Buhari and the APC.

Why should he join the birds of prey to feed on the blood, flesh and guts of the Nigerian people?

The truth is that he has betrayed his people and joined forces with those that seek to enslave them simply in an attempt to secure freedom and goodwill for himself.

Is that what leaders are meant to do? Are they meant to give in to their most morbid and irrational fears and collaborate with those that seek to destroy their nation, their people and their future?

Akpabio reminds me of the old African chiefs and traditional rulers that sold their own people into slavery to the white slave dealers in return for tiny crumbs and protection.

He reminds me of the black slaves that fought on the side of the southern secessionist forces in the American civil war who attempted to preserve the institution of slavery.

He reminds me of the inglorious Scottish clans that turned their backs on Scotland’s heroic Bonny Prince Charlie and instead betrayed their people and fought on the side of the English oppressors to oppose Scottish emancipation and liberation.

He reminds me of everything that is unpleasant, servile, weak, ugly, uncouth, cowardly and dishonorable.

The fact of the mattee is that Akpabio deserves to be pitied. He is more worthy of pathos than wrath because, like Judas Iscariot and those that betrayed and crucified Our Lord and Saviour Jesus Christ, he “knows not what he does”.

Shakespeare wrote that “a coward dies a thousand times before his death, but the valiant taste of death but once.”

Soyinka wrote that “the man died in him who remained silent before tyranny”.

Akpabio has died a thousand deaths and the man has died in him.

Courage, risk and sacrifice are the fuel and engine room of the struggle for liberation. I would rather live as a free man for one day than live a thousand years as a coward and a slave.

May God guide my friend and brother Godswill Akpabio and may He open his eyes and cause him to appreciate the folly of his own actions and the very grave consequences of the monumental mistake he is about to make.

May He remind him that the forces of darkness have nothing to offer but death, sorrow, shame and destruction.

May He remind him that no matter how dark the night, joy comes in the morning for those who have faith, who trust in the Lord and who stand firm till the end.

May He remind him that those that joined Adolf Hitler, even in his last days, ended up dying with him.