Skiibii Set To Sue Ex-lover Ms. DSF Over Accusation Of Stealing From Her

The singer has issued a press release as regards the accusation by his estranged lover.

Nigerian singer Abbey Toyyib Elias, popularly known as Skiibii, has issued a statement to counter his estranged lover Ms. DSF’s claim that he stole from her.

Ms. DSF, who is an actress and DJ, revealed in a recent interview with media personality Chude that she was robbed while asleep during a double vacation (that she funded) with an undisclosed ex-boyfriend in Zanzibar, Tanzania.

DSF, who has previously spoken about her unhealthy relationship with the singer, did not mention his name in the recent interview, but fans deduced that she was referring to Skiibii.

According to her, he lost two phones, ATM cards, and some money during the trip to Zanzibar.

Responding to the accusation in a press release issued by Skiibii’s management, the statement made it known that the trip was partly funded by the musician, who also lost two diamond necklaces, one rose gold Cartier wrist watch, four diamond rings, one iPhone, and some money during the vacation. 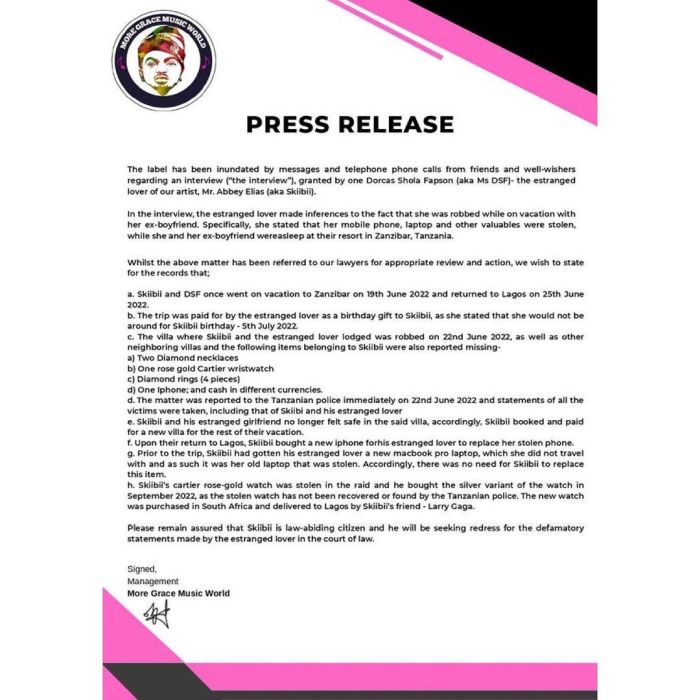