THIS IS HUGE!! Davido Joins Wizkid And CKay As The Only Nigerian Artists In History To Achieve This

Nigerian megastar, Davido has joined Wizkid and CKay as the only Nigerian artistes in the history of music to have a certified platinum song in the US.

David Adeleke, better known by his stage name Davido joined the starboy and CKay to become the first Nigerian artists in history to have a song that has sold over a million sales in the US as we get ready for a joint concert with Wizkid.

The RIAA gave Davido‘s smash song “Fall,” which was released on June 2, 2017, a platinum certification after it sold over a million copies in the US alone.

The popular song, which received a Gold certification on May 28, 2020, has shown another another accomplishment that has made many people proud of Davido the superstar.

Davido finally joins Wizkid, who has sold over a million copies with his hit song ‘Essence‘ and CKay who has also sold over one million units with his smashing hit ‘Love Nwantiti,’ in the US.

The 30 BG boss has revealed that there would be more to come from him as an artist in 2023, and fans are super excited and can’t wait for it. 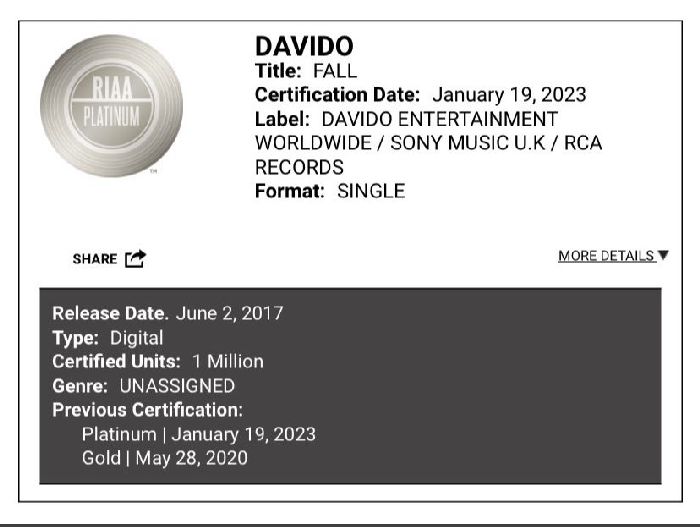